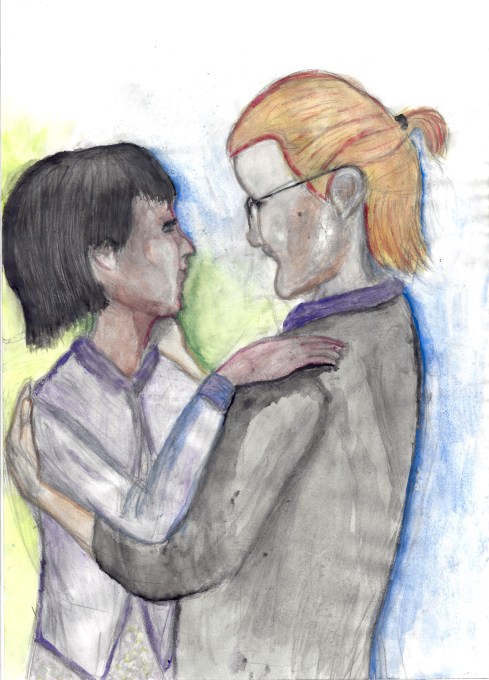 MadameLee’s Carly and Wade from, The Swanson Legacy is my second drawing for Purple Week. I decided to go for a water colour because I thought it best suited the chapter where Carly falls for Wade. After all, The Swanson Legacy uses a fairytale medium – although, don’t be disillusioned, they’re about as light as a Grimm’s fairytale. Maybe I should have gone for a Gothic painting instead. XD

Having said that, although I don’t want to give away any spoilers, because I think this legacy’s worth a read – particularly Carly’s arc (I just love spoilt teenagers), this particular phase of Carly in the picture, is something rather magical and worthy of a watercolour. I won’t say what it is, but I’ll say the picture’s a hint. Okay, now I’ll be quiet.

I was actually quite worried about how the picture was going to turn out, since I used the wrong paper for watercolour! (silly me. XD). However, I think the picture turned out alright in the end and the kind of messy look gives it a bit of charm.

Overall, I was so excited to be given the opportunity to draw Carly. She is a wonderful character, even when she was a bit of handful and I certainly recommend checking out The Swanson Legacy.

2 thoughts on “Purple Week: Carly and Wade, The Swanson Legacy”